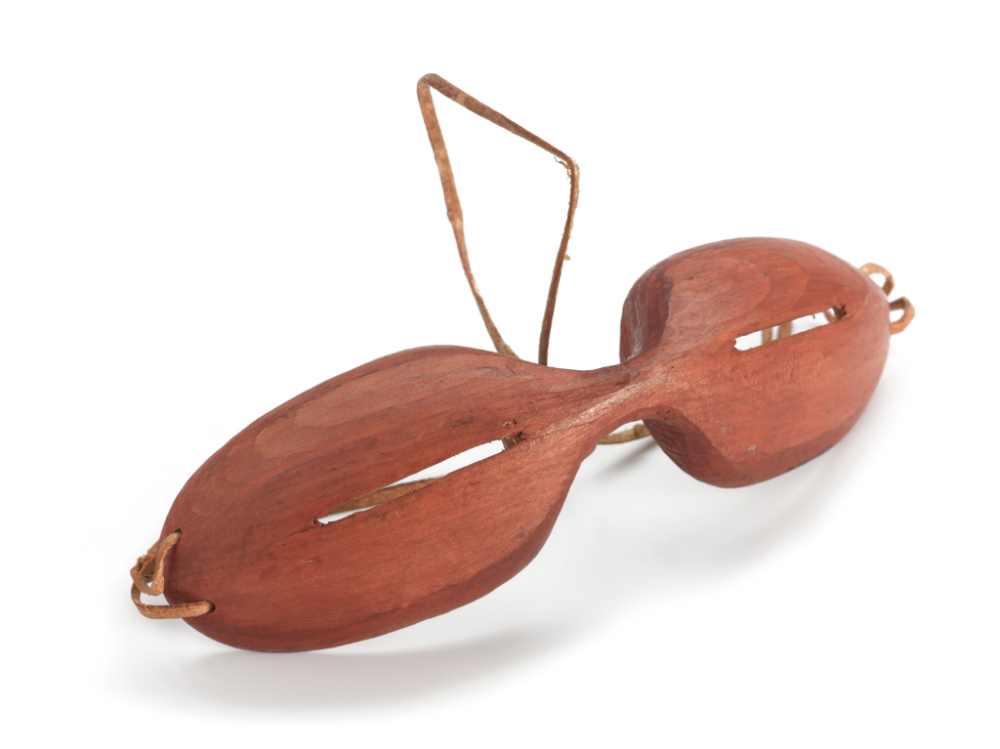 To solve this problem, many Inuit tribes made snow goggles, which were sometimes made of bone, ivory, or wood, as shown here. To understand why snow goggles were made, picture driving through the snowy tundra on a sunny day without sunglasses. The small holes cut down on the UV light that gets to the eyes and narrows the field of view. Even though the paperwork says the Caribou Inuit Snow Goggles was made in the early 1900s in Nunavut, not much is known about them.

Inuit and their ancestors used Inuit Snow Goggles to protect their eyes from UV rays. This is important because, during the summer, there is no sunset in the Arctic. The time without a sunset increases with latitude, starting with a full 24 hours during the summer solstice near the Arctic Circle (66°34’N). This means that at the North Pole (90°N), the northernmost point, it is always light for six months out of the year.

Spending a long time in direct sunlight on surfaces that reflect a lot of light, like ice or snow, can hurt your eyes.In the Arctic sun, this can cause temporary blindness and eye pain (photokeratitis). Inuit and other northern people in Arctic countries like Canada came up with different ways to protect their eyes so they wouldn’t go blind in the spring and summer when the sun’s rays are the strongest.

Inuit snow goggles have tiny holes that reduce the amount of UV light that gets to the retina, making snow blindness less likely to happen. Some of the things used to make them are ivory, wood, caribou antler, bone, leather, whalebone, and baleen. Even though the field of view is small, these goggles make it easier to see. There are many kinds of Inuit Snow Goggles because the weather, geography, and materials are different. Some people, like the Aleuts who live in the Aleutian Islands, prefer to hunt from a kayak while wearing visors instead of goggles. Polarized-lens glasses are becoming more popular, and snow goggles are becoming less common.

Inuit people wore Inuit Snow Goggles to protect their eyes from snow blindness. The small horizontal slots in these eyepieces cut down on glare and the amount of light that gets into the eye. Some users put soot or ashes inside to make the light even dimmer. The slit improved distance vision by focusing light on the retina, like how a pinhole camera focuses an image in the distance.

Goggles were made from wood, bone, caribou antler, ivory, and baleen. The eyepieces were held in place by strips of sinew or leather. Goggles come in many shapes and sizes; some are curved to fit close to the face. And. made some better. In late winter and early spring, many people wore snow goggles. As the days got longer and the sun rose higher in the clear sky, the snow reflected more light. Arctic people from Asia, Europe, and North America wore these snow goggles in the past. However, most people wear modern glasses these days.

Inuit Snow Goggles, Too much sun can cause snow blindness, which is a painful condition. It often happens in late winter and early spring, when snow and ice are white and reflect light everywhere, making it hard to close your eyes. This wound feels like a sunburn on your eyes.

The retina and cornea, which are the outer and inner layers of the eye, become inflamed. Some signs are red, watery eyes, eyes that hurt and feel gritty and swollen shut, temporary blindness, or even permanent loss of vision. Similar to a sunburn, symptoms may not show up for a few hours after exposure and may last for hours, days, or weeks, depending on how badly the eye is hurt.

These Inupiaq snow goggles, made of wood and found in the Norton Sound area of Alaska around 1867, have two separate eye holes, a slot for the nose, and a protrusion above the eyes to protect the eyes from the sun even more.

Many Alaskan communities made and used these simple but effective snow goggles. They were made from a single piece of wood with only one hole for the eye. Inuit Snow Goggles, This example is from the Deg Xinag Dene (Athabascan) area of the Yukon River, dating back to the middle of the nineteenth century. On traditional snow goggles made of one piece of wood, there are two eye openings, a “visor-like ridge” above the eye slits, and a slot for the nose (not visible in the image)

“Wooden snow goggles,” or “nigaugek,” are made from a single piece of wood and date back to the late 1800s. They live in the town of Kushunuk in Central Yup’ik. Even though the eye holes are big, the soot that darkens the inside of the goggles under the eye holes helps to cut down on glare. Snow goggles are made of two spheres of birch bark that are stitched together with holes in the middle and joined by a strip of birch bark

Inuit Snow Goggles, In the late 1800s, Gwich’in (Dene) Athabascans made “eyeglasses” out of birch bark, and the strap was made of leather. They come from Alaska, near the upper Yukon River, where many birch trees exist. Yukuktaak, also called “snow glasses” or “snow goggles,” are Inuit snow goggles from the Norton Sound area of Alaska dating back to the late 1800s. They are made from a Dall’s sheep hoof that has been softened, twisted, and cut.

We use cookies on our website to give you the most relevant experience by remembering your preferences and repeat visits. By clicking “Accept All”, you consent to the use of ALL the cookies. However, you may visit "Cookie Settings" to provide a controlled consent.
Cookie SettingsAccept All
Manage consent

This website uses cookies to improve your experience while you navigate through the website. Out of these cookies, the cookies that are categorized as necessary are stored on your browser as they are essential for the working of basic functionalities of the website. We also use third-party cookies that help us analyze and understand how you use this website. These cookies will be stored in your browser only with your consent. You also have the option to opt-out of these cookies. But opting out of some of these cookies may have an effect on your browsing experience.
Necessary Always Enabled
Necessary cookies are absolutely essential for the website to function properly. These cookies ensure basic functionalities and security features of the website, anonymously.
Functional
Functional cookies help to perform certain functionalities like sharing the content of the website on social media platforms, collect feedbacks, and other third-party features.
Performance
Performance cookies are used to understand and analyze the key performance indexes of the website which helps in delivering a better user experience for the visitors.
Analytics
Analytical cookies are used to understand how visitors interact with the website. These cookies help provide information on metrics the number of visitors, bounce rate, traffic source, etc.
Advertisement
Advertisement cookies are used to provide visitors with relevant ads and marketing campaigns. These cookies track visitors across websites and collect information to provide customized ads.
Others
Other uncategorized cookies are those that are being analyzed and have not been classified into a category as yet.
SAVE & ACCEPT
Shares